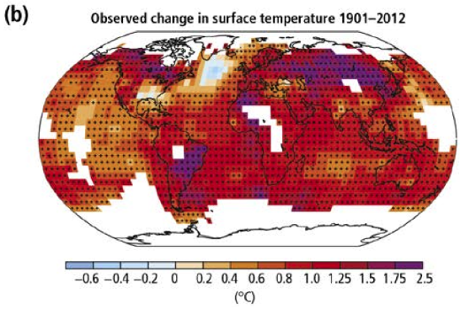 Map of the observed surface temperature change, from 1901 to 2012, derived from temperature trends determined by linear regression from one data set Photograph: IPCC
Here’s the same thing, seen another way – it shows how much temperatures have been above or below the late 20th-century average. The top one is for each year, and the bottom for each decade. Records show 13 of the 14 warmest years on record occurred this century. 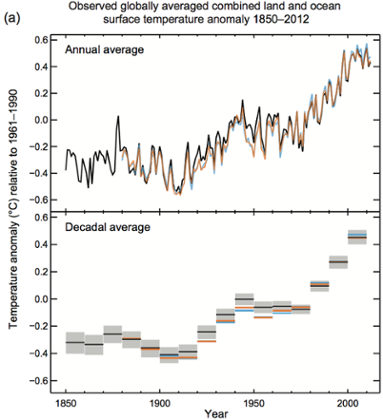 Observed global mean combined land and ocean surface temperature anomalies, from 1850 to 2012 from three data sets. Top panel: annual mean values. Bottom panel: decadal mean values including the estimate of uncertainty for one dataset (black). Anomalies are relative to the mean of 1961−1990 Photograph: Average global temperatures – IPCC
And here’s how much hotter the scientists say the planet is projected to get. The map on the left shows most places will get another degree or so of warming on top of the 0.7C we’ve already experienced globally since pre-industrial times. Unfortunately, that map assumes we’re going to dramatically cut our greenhouse gas emissions, and the map on the right is what we’re on track for given the record-breaking rate at which we’re all pumping out emissions now.
If you’re thinking a 5C rise by 2100 doesn’t sound like much, it’s worth considering that the global average temperature in the last ice age was only 4-5C colder than today:

Projections for increase in average temperatures in 2081– 2100, above late 20th-century average temperature Photograph: IPCC
Here’s what the temperature rises we’ve seen have already done to sea level rise (as glaciers melts and water expands as it gets warmer). A few millimetres globally might not look like much but it is if you take the long view. The draft report says: “The rate of sea level rise since the mid-19th century has been larger than the mean rate during the previous two millennia.” 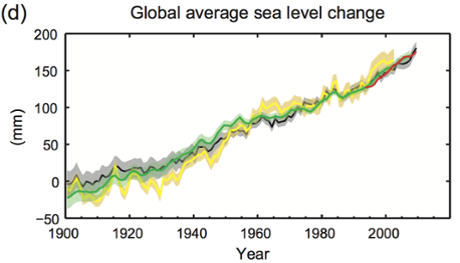 Global mean sea level, relative to the 1900–1905 mean of the longest running dataset. There are four datasets, each marked by a different colour. Photograph: IPCC
And here’s what a warming world is doing to sea ice in the Arctic, which some scientists are now linking to the more severe winters Europe and northern Asia has experienced in recent years: 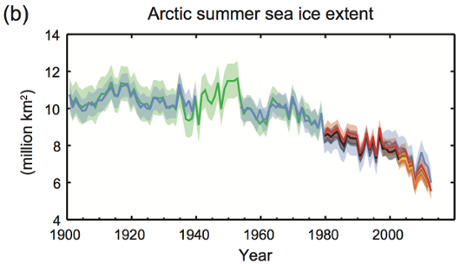 Extent of Arctic July-August-September (summer) average sea ice Photograph: IPCC
And here’s why this is all happening. We’re spitting out more emissions that ever before, and it’s getting worse. Over the past decade emissions grew at twice the rate of the previous 30 years. 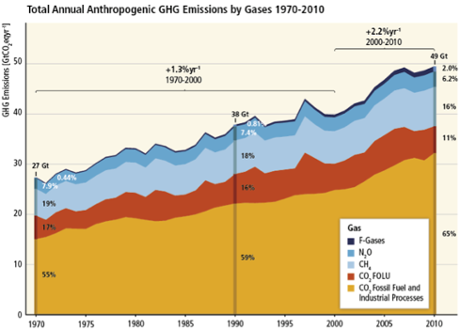