BBC: “Chemicals giant Ineos has announced plans to invest up to £640m in shale gas exploration in the UK. The company plans to use the gas as a raw material for its chemicals plants, including Grangemouth in Stirlingshire.”
“Grangemouth is currently running at a loss, but Ineos believes shale gas will transform the economics of the plant.
Shale gas extraction is promoted as an important potential energy source, but has sparked opposition from environmental groups.
Ineos chairman Jim Ratcliffe said he wanted his company “to become the biggest player in the UK shale gas industry”.}
The firm added that “substantial further investment would follow if the company moved to development and production”.
….Ineos is currently building Europe’s largest shale gas import facility to feed its petrochemicals plant at Grangemouth – but it wants to produce home-grown shale gas as well.
In recent months it has been buying up rights to explore across hundreds of square miles of the Midland Valley around the Stirlingshire site.
Ineos is also thought to have applied for further licences as part of the government’s ongoing onshore licensing round.
The company outlined plans on Thursday to invest $1bn (£640m) in UK exploration.
“I believe shale gas could revolutionise UK manufacturing and I know Ineos has the resources to make it happen, the skills to extract the gas safely and the vision to realise that everyone must share in the rewards,” said Mr Ratcliffe.
BBC industry correspondent John Moylan said the move will be seen as a significant vote of confidence in the sector, and will position Ineos as one of the major players in the emerging industry.
But, he added, it will also put Ineos in the sights of protesters who believe shale gas and fracking are dangerous and harmful to the environment.
….Earlier this year, Ineos announced plans to hand over up to £2.5bn of shale gas revenues to communities close to its wells. 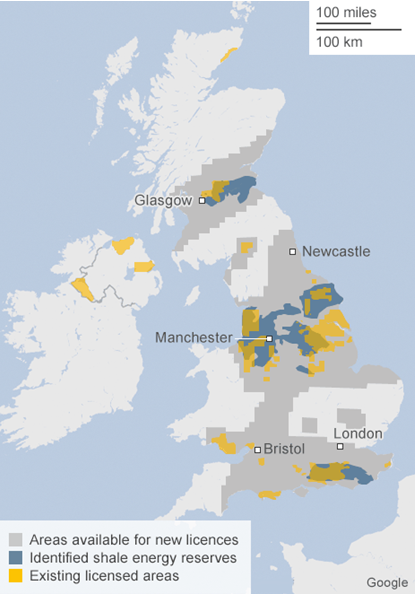 The company has bought the licence for shale gas exploration and development across a 329sq km area around its Grangemouth power plant.
It will give away 6% of revenues to local homeowners and landowners.
However, Friends of the Earth Scotland criticised the move as “a transparent attempt to bribe communities”.
The British Geological Survey has estimated there are “modest” shale gas and oil resources in the area.
Fracking is used extensively in the US where it has revolutionised the energy industry.
The Scottish government has called for devolved powers on fracking after the UK government decided to press ahead with plans to let companies drill at depths of 300m below private land without consent.”